The duties incumbent upon the driver of a CMV relative to cargo are strict, and frequently ignored in practice. These rules are critical to the prosecution of a claim involving cargo which falls off a truck, shifts causing the vehicle to wreck or otherwise interferes with operation causing an accident.

1. A driver may not operate, nor a motor carrier permit operation of, a CMV unless the cargo is properly distributed and adequately secured, the tailgate, doors, tarps, etc and equipment used to secure the cargo are secure, and the cargo does not obscure the drivers line of sight forward, left and right, nor prevent egress by the driver or access to emergency accessories.

2. A driver is required to inspect cargo and devices used to secure cargo “within the first fifty miles after beginning a trip” and adjust as necessary, including adding more securement devices.

4. These rules do not apply to a sealed container the driver has been ordered not to open or a vehicle carrying a load which makes inspection impracticable. 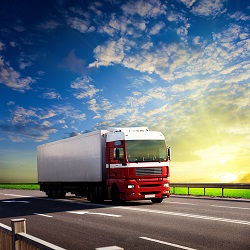 There may not be another set of rules found in the FMCSR so observed in the breach. Must the inspection occur every 150 miles? Every three hours? This may happen for specialized loads, certain hazardous materials, and maybe even some wide loads. However, for general freight, it simply does not occur so frequently, nor is the rule arguably practical in the real world. If every truck not sealed up had to stop for a detailed cargo inspection every three hours or 150 miles, the movement of freight in this country would be significantly affected.
Nonetheless, this is the law, and if counsel encounters a shifting load case, or load which falls from the truck, these regulations will need to be addressed. The logs should be reviewed. If the driver is stopping to check the load every 150 miles or three hours, that should be reflected in the logs. Of course, if a sealed container is involved, the inquiry may need to focus on other points. For example, the USDOT interpretations address the proper way for a motor carrier to determine how a sealed truck is loaded. It may:

This interpretation may be used to challenge the motor carrier that pleads ignorance to improper loading. Further, the USDOT has determined that a driver who has a key to the trailer must comply with the inspection procedures set out in the regulation. The trailer in that situation is not considered sealed, for purposes of the regulation.
Finally, while the driver is not required to personally load, block, brace and tie down the cargo, he is required to know how to do so and be able to make adjustments. Keep this in mind as you depose a 400 pound driver who is of breath sitting still and was driving a flatbed hauling tractor parts which fell off on the freeway.

A cargo expert can be a good idea. The proper securement of cargo, especially unusual loads such as plastic pipe (referred to in the industry as a “load of marshmallows” because of the difficulty tying it down), large pieces of top heavy machinery, loose loads which must be tarped, etc. involve fairly complex decisions regarding securement. Counsel wants to be versed in the issues and able to probe the driver’s expertise and experience from an educated position. These experts are not the same as general accident reconstruction experts. While the latter type of expert can tell you why and how the wreck happened, the cargo expert can tell you where the trouble started.
Keep in mind the USDOT states that the shipper is not subject to the loading regulations. The duty is placed on the motor carrier and driver. It may be tempting to sue the shipper, especially where it actually loaded the vehicle. There is law that recognizes such a claim. However, realize that by attempting to place the blame on many, the jury may become confused about who was the real culprit and be unable to agree about who is responsible. The regulations place the duty on the motor carrier and driver; make sure there is a good solid reason to blame a third party. This is not to say the pursuit of a deep pocket is not worth the game. Just ensure the “calculus of complexity” has been perform before taking and proving the claim to that level.