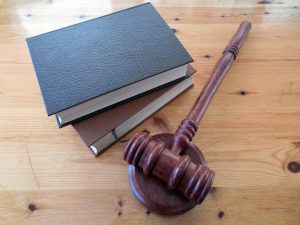 Two books and a gavel resting on a desk.

“Like a good neighbor, State Farm is there.”  But do good neighbors try to cheat you out of coverage that you paid for, and then rig the courts to avoid responsibility? This is the exact scenario that was alleged in some litigation filed on behalf of millions of policyholders. The litigation was settled last month for $250 million dollars.

Round One: The Original Claim

The recent settlement was actually the result of a second class-action lawsuit against State Farm. The first lawsuit was filed in 2005, Avery vs. State Farm. That lawsuit alleged that State Farm had defrauded its policyholders by using “crash parts” of substandard quality rather than parts made by the original manufacturer when repairing vehicles that had been damaged in an accident. The lawsuit was filed in Illinois State Court and was certified as a “class-action” lawsuit – meaning that the named plaintiffs stand in for a large group of people with the same claim against the same defendant. Eventually, the plaintiffs were awarded over $1 billion at trial.

The deciding vote to overturn the 2005 verdict in the Avery case was cast by Supreme Court Chief Justice Lloyd A. Karmeier. The second lawsuit, Hale vs. State Farm, claimed that State Farm secretly funneled hundreds of thousands of dollars to Karmeier’s 2004 campaign for election to the court. The second lawsuit was certified as a class-action and accused State Farm of engaging in racketeering. The lawsuit sought over $10 billion in damages on behalf of State Farm policyholders and was settled for $250 million just before the trial was scheduled to begin. State Farm continues to deny any wrongdoing.

Why are we writing about a lawsuit that took place in Illinois? First, State Farm is a national insurance company, and the class action lawsuit included plaintiffs from the state of Georgia.  More importantly, it shows how far insurance companies are willing to go in order to protect their bottom line. This lawsuit began by State Farm allegedly trying to save money on claims by using knock-off automotive parts. Once they were sued, they litigated all the way to the Illinois Supreme Court despite losing at both the trial level and on appeal. In order to avoid losing a third time, it is claimed that State Farm tried to pay off the judge.

We’ve written before about insurance companies, and this case is just another reminder of the challenges you may be facing.  If you or someone you care about has been injured in an accident, it’s important to get the help you need to protect your health and your future.  The attorneys at Slappey & Sadd know how to fight the insurance companies to get the compensation you deserve. Contact us today for a free consultation – call us at 404-255-6677 or email us via our online contact form.