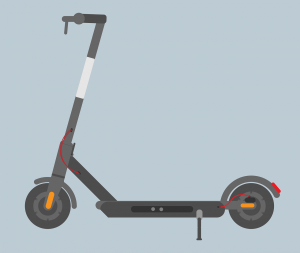 Electric scooters have become a very popular form of transportation in cities like Atlanta. Their low cost, fuel efficiency, and ease of use give riders a fun and affordable alternative to get around the city.

Unfortunately, the increased prevalence of scooters has also led to dangerous scooter accidents. These accidents can lead to riders suffering serious injuries in the event of a collision caused by a negligent driver. If you or a loved one has been in a scooter accident, you should contact an Atlanta personal injury attorney as soon as possible.

END_OF_DOCUMENT_TOKEN_TO_BE_REPLACED

In an update to some of our prior posts, a 20-year-old man was tragically killed while riding an electric scooter – Atlanta’s first fatality involving the trending means of “shareable” transportation. Eric Amis, Jr. was killed back on May 16th while traveling on West Lake Avenue by a Cadillac SUV. The driver of the SUV was arrested and charged with second-degree homicide by vehicle and speeding. Mr. Amis’s family has since called for electric scooters to be banned from Atlanta’s streets.

We’ve been tracking the issues related to these scooters for a while in order to better serve the people of Georgia who suffer injury from their use. If you’ve been injured while riding a scooter, you may have a claim for compensation. Talk to one of the personal injury attorneys at Slappey & Sadd by calling 404-255-6677 or by filling out our online contact form. The first consultation is always free.

END_OF_DOCUMENT_TOKEN_TO_BE_REPLACED

We first wrote about electric scooters back in December, in light of their growing popularity in urban areas along with media reports concerning serious injury. We then learned about a case involving two Georgia Southern University students who were seriously injured while riding a Lime scooter. More recently, we wrote about the Atlanta City Ordinance that was just adopted in order to clean up our sidewalks and protect the public. We’ve now learned that an Atlanta man sued e-scooter company Bird on March 8th as a result of injuries suffered in January.

The plaintiff in the lawsuit, Simon Clopton, claims that he was riding the scooter on the Georgia Tech campus when it suddenly braked and went left. The sudden stop threw him to the ground, resulting in a broken arm and leg and $156,000 in medical bills. Mr. Clopton claims to have been on the scooter for only one or two minutes when the accident occurred. He does not know how fast he was going, but the scooters are capable of traveling at speeds of up to 15 miles per hour. Mr. Clopton claims in his lawsuit that Bird knowingly rented scooters with faulty brakes.